You are here: Home

As its name implies, this app is for encrypting text. There are many situations in which one needs to encrypt some data, say some messages, notes, or passwords etc. The most widely used way to encrypt data is to change its form and format so that nobody understands what is written. This app does this basic encryption and has varied features.

What is AES and why is it so widely used? While one encrypts, one needs to ensure that we aren’t fooling ourselves by using a code that can easily be cracked. This false sense of security is more dangerous than aware vulnerability. This is where one realizes the importance of AES encryption.

Until the end of 1990s DES (Data Encryption Standard) was the most popular and widely used encryption algorithm, but with passage of time, the National Institute of Standards and Technology (NIST) of US realized that it will not be able to keep pace with fast-changing technology. Hence, the need to develop an encryption algorithm that could stand the test of time and rapid changes in technology was felt.

Rijndael, a cipher developed by Daemen and Rijmen was selected as the algorithm for AES encryption. Various competing ciphers were analyzed by the world cryptographic community at large. Five ciphers were shortlisted by NIST in August 1999. Extensive analysis was carried out on these five ciphers. They were tested for reliability, vulnerability, versatility and speed, among other criteria. In October 2000, Rijndael was accepted as the algorithm for AES encryption by NIST. This encryption is widely used by the US government for protecting classified information.

You can learn more about AES from https://csrc.nist.gov/publications/fips/fips197/fips-197.pdf

Why encrypt at all? Most of us use our mobiles for communication now days, both personal and professional. As time goes by, we are bound to be more and more dependent on our mobiles for all sorts of transactions. In fact, our mobiles are now becoming an extension of ourselves, too personalized. This personalization is surely for our own comforts, but it makes us vulnerable to cyber invasion in ways we could not have imagined before. To fight all sorts of technological threats to ourselves, awareness is the key. Once we know the threats, we will find a way to fight them. For example, some malware, Trojans or viruses can enter our mobiles and leak info to hackers or invaders, without our slight knowledge, leave alone permission. Besides, there is always threat of theft of information through humans. If not all this, then there are bound to be people around us who intentionally or unintentionally peep into our mobiles. Not only is it an invasion of privacy, but it can also be unsafe for us too, at times. So, encrypting your sensitive data is a must if we have to keep pace with today’s times.

Features of the App and Benefits

Do you think this app is not meant for you? I bet you will be surprised to know how useful it can be to you! You’ll relate the benefits to your routine and realize how it can save the day for you. It’s just very basic: Encode any info that you need to save or communicate secretly. Remember that the app merely encrypts, but you can save the encrypted data (which you can optionally lock with a password) in a separate file. This file can be used in various situations after you decrypt the required info. This is akin to carrying a safe vault with yourself that is locked with a password that only you carry in your mind. You can…

If used with wisdom, this app gives you more safety with your mobile. In case you need to lend your mobile to someone or it gets into wrong hands, your data is password protected and hence safe.

You can encrypt lengthy text also comfortably and quickly.

The most remarkable feature of the app: You must be thinking it is the ability of the app to encrypt and its ease of use that is remarkable. But for us, who have created the app, security of your data comes first. You will note that the app is totally ad-free and it does not take any permissions while installing. When the app does not access any secure data on your mobile, it cannot possibly be a security threat. This for us, is the most significant feature of the app.

The app is simple, the interface is self-explanatory. It’s an ad-free app with absolutely no pop-up irritant.

It’s an offline app. It does not require Internet connection to encrypt. You could need internet to send messages though, but encryption is done offline.

How to use this app?

Installing the app is the first step. 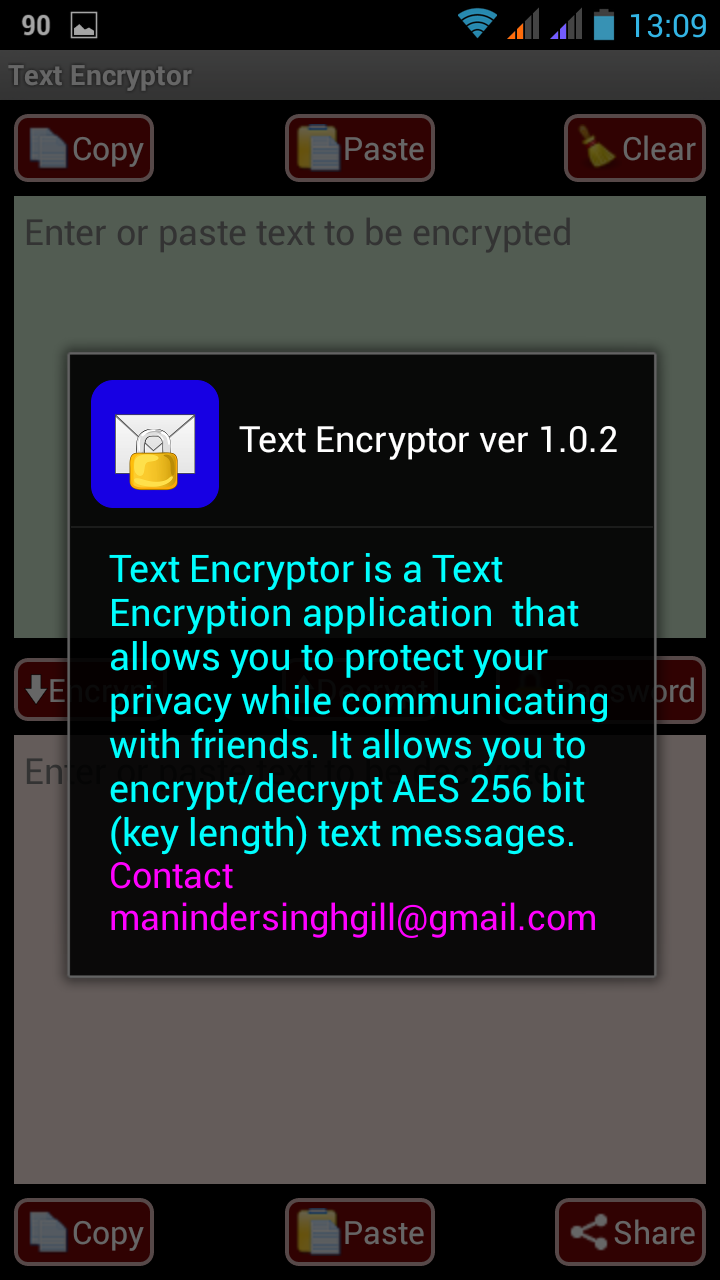 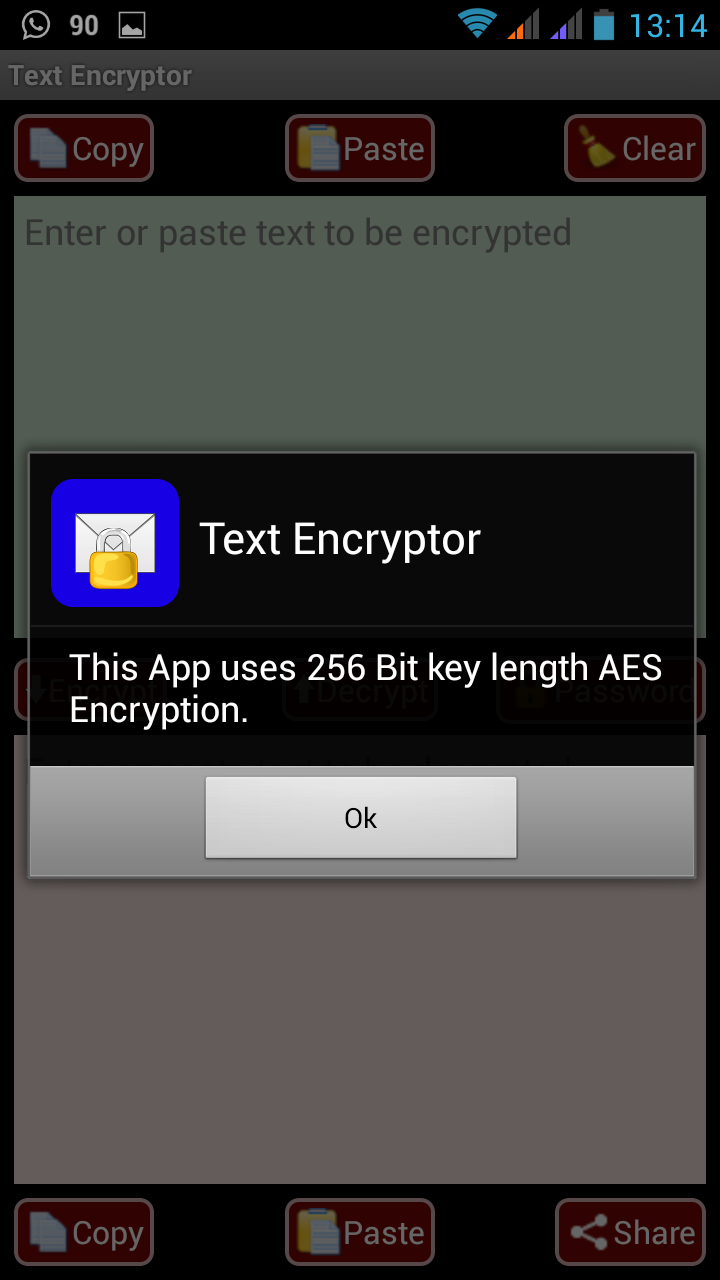 Then you type in the text that you need to encrypt and click the ‘encrypt’ tab. The text gets encrypted in the box at the bottom. It appears as an alphanumeric string with special characters too. 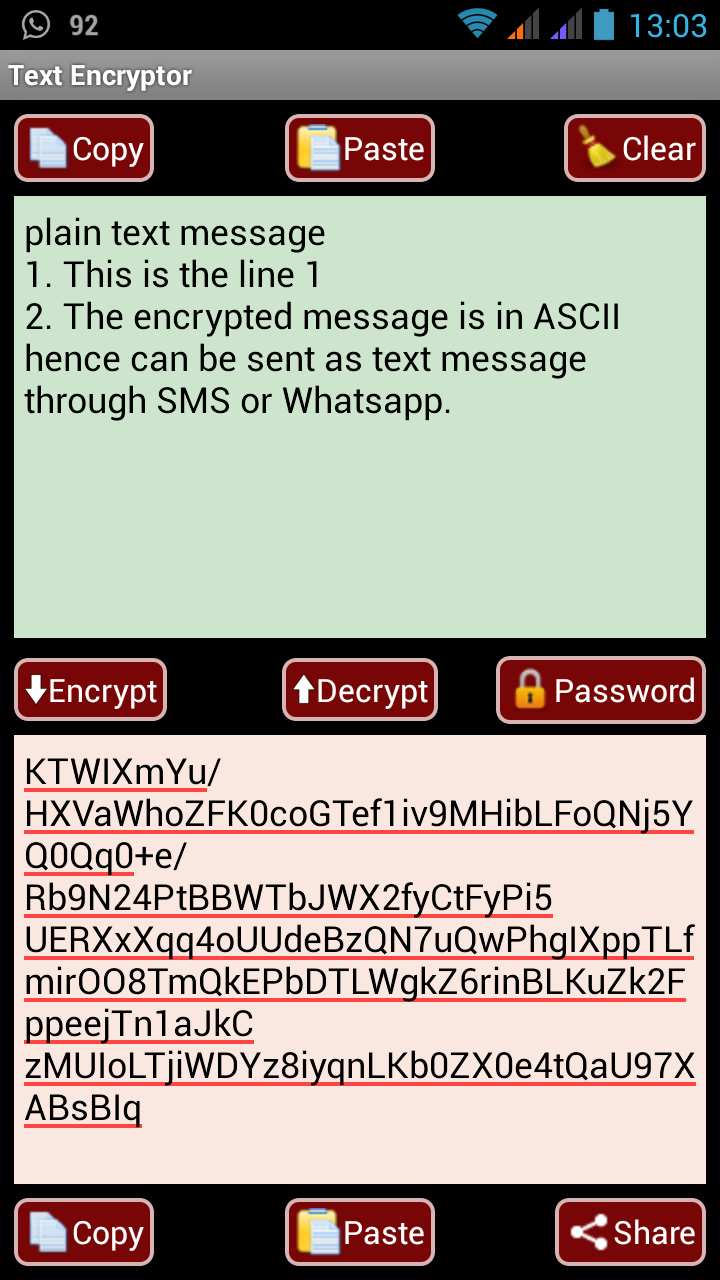 You can also paste the text that you want to encrypt, instead of typing it. ‘Copy’ and ‘clear’ tabs are also handy here.

You can then secure this encrypted message with a password. The password should be at least 6 chars long with at least one of each a digit, an uppercase letter, a lower case letter and a symbol from @#$%. 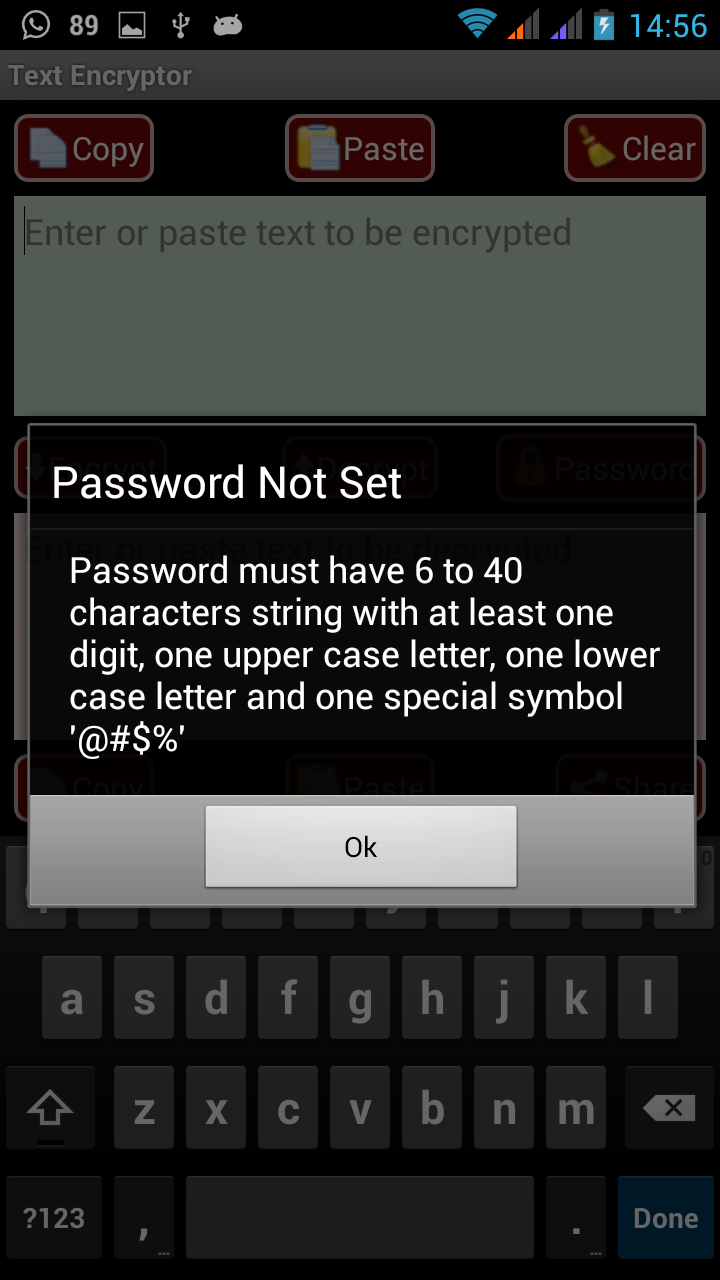 This combination in the password has been introduced so that you are able to keep your messages secure perforce. 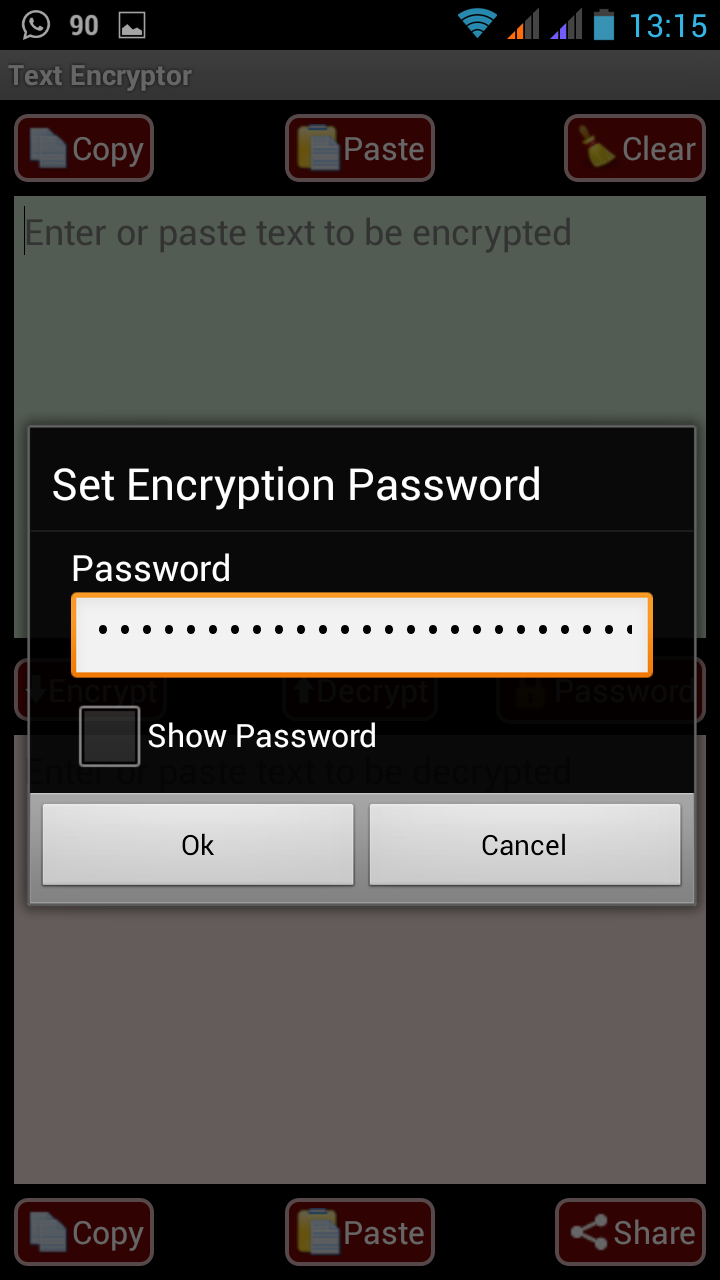 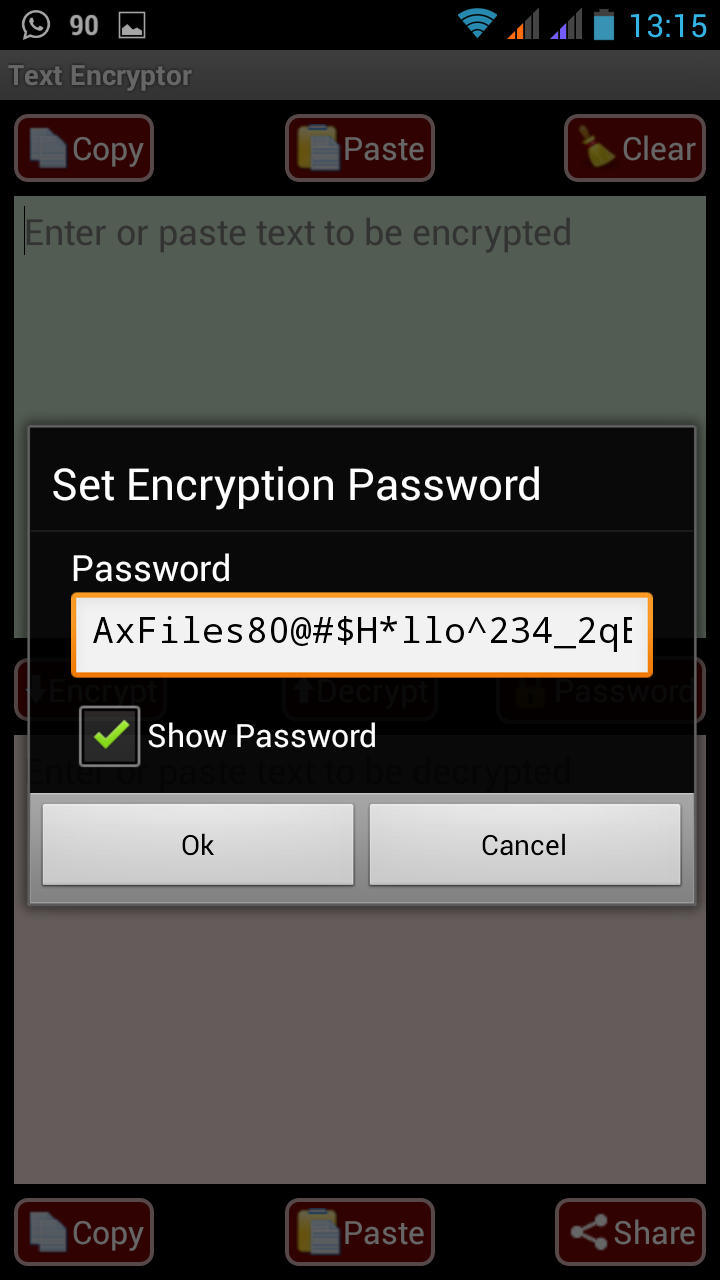 Though the AES encryption algorithm is very secure, your password determines whether it can be cracked or not.

The encrypted text can be copied, saved or shared as per your need. 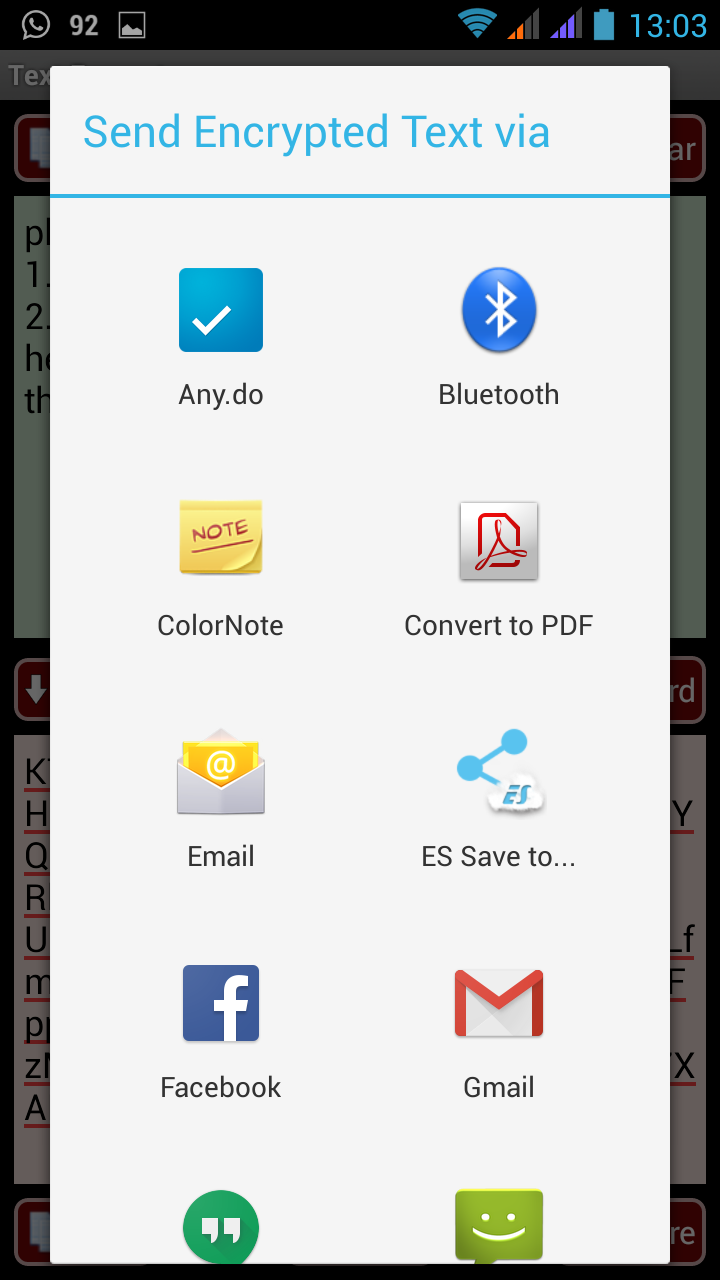 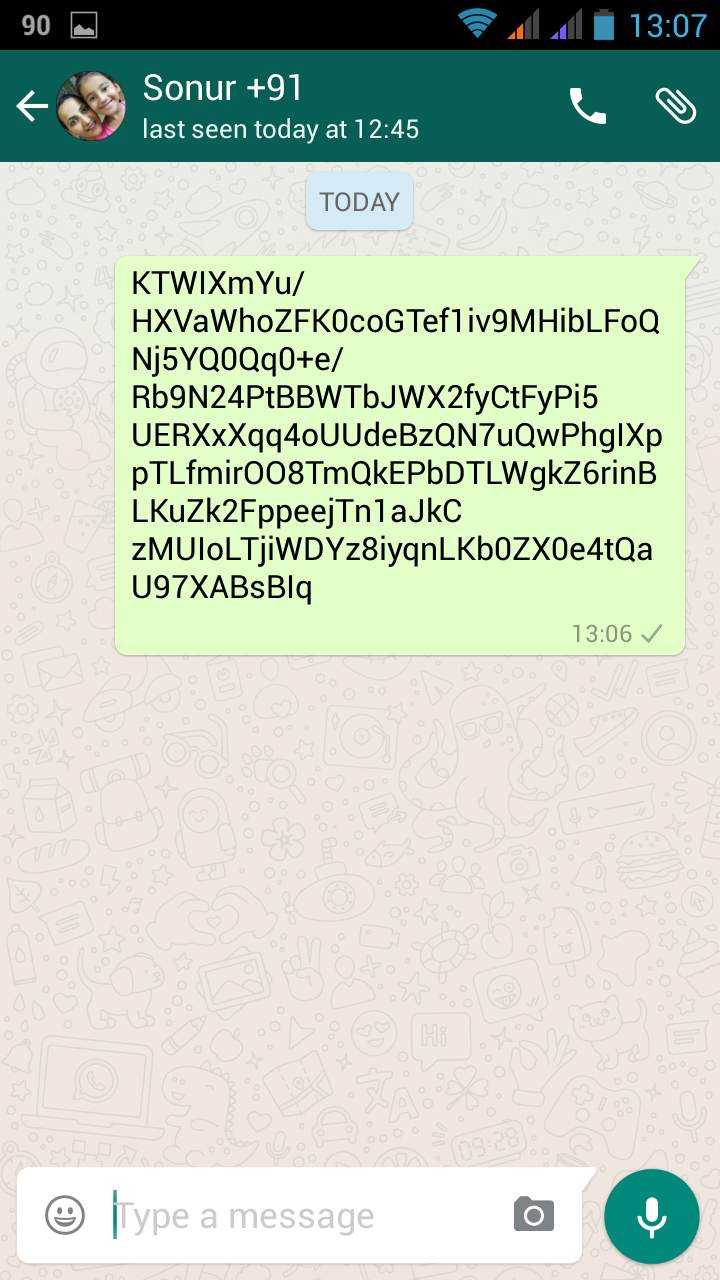 If you have to share the encrypted text, you can do so from your mobile through WhatsApp, SMS, email etc. The text can be decrypted at the other end through the same app and by applying the same password as you used to encrypt the text. A password ensures double security. The best combination would be to send your message through one means of sharing and the password through another.

It is as simple as that!

You can copy the encrypted text wherever you need to keep your info safely, say in some folder or notepad. This can be done for saving your sensitive data for quick reference. The data can be readily decrypted in the app whenever you need it.

Ours is an Open source software and we do not charge you for it. All we ask for is constructive feedback to help us improve our innovations. We do try to work upon the suggestions we receive.

If you intend to use the desktop versions of this app for Windows and Linux, you can send an email to us. We’d be glad to respond.