You are here: Home

There are occasions when one wants to download  media content such as movies   from a website which  only allows the media content to be viewed online on your browser. Programs such as Downloadhelper come to our rescue to download such content. However, if the file size is large, and the Internet connection is slow, invariably one ends up with partial content. Thereafter , when one retries to download the content from the website the downloader programs starts from the beginning and not from the place it had last stopped at. However a small command line Linux utility called 'wget' comes to our rescue. Wget is available for both Linux and Windows platform.

Broadly the steps involved are :

4. Start downloading the content being streamed to your browser and capture the URL from the live download.

5. Download the media using wget from the command line.

I have taken a Windows 7 platform to demonstrate the procedure. To start with lets download Mozilla Firefox . Though these steps are quite trivial , yet I have given them out here for ease of understanding. Go to the link shown.

In this article I would talk about securing a intra-network from external attacks. The intra-network could be a group of PCs connected to a switch and the switch in turn connected to an Internet Broadband modem. Now we could implement the required security in two ways. First secure all the PCs by loading desktop firewalls in them. Loading those PCs with anti virus software with latest updates. Further more , update the OS with all the required patches. However, we can not do much about the end users. Many a times we are faced with users who have got very little knowledge about computer networks in general. These users invariable would load softwares on to their machines which would comprise their security . One solution, could be that one takes away the administration rights from them and let them use the machine with user rights. Therefore, they would not be able to cause any damage to their system. However, this setup would require configuring each and every machine on the system. Further more, no users would like to be dictated how they should use their machine, after all they own it.

So whats the way out. Think of securing the perimeter. This way we need not secure each individual PC and the users are at liberty to do whatever they feel like with their machine, as they are the administrators themselves. As we have got only one gateway to the intra-network in terms of the Ethernet connectivity coming from the Broadband user, to engineer the above setup we could pass it through a Network Firewall. The resulting setup now would be , Ethernet data coming from the broadband router goes to the network firewall's WAN port, the intra-network gets connected to the LAN port of the Network firewall.

Fine, now that we have thought of placing a network firewall, lets see what all is available in the market. Well through money and you can pick up the best of Juniper and alike Firewall. But do we really need all that high end Network Firewall. The answer is , one could easily do a much better job with a Linux based Network Firewall. Did some one say Linux. And the first response one gets is anything but Linux or I have never used Linux etc. This article I have specially target towards those network administrators who have had no experience about Linux, what so ever. We would build a Network firewall and much more in a matter of time from scratch.

To start with get hold of an old PC having two LAN cards and atleast 256MB RAM, 2GB Hard-disk space. Keyboard, mouse and Monitor would be required only during the installation process.

Read more: How to secure your intra-network from external attacks when connected to Internet 4 comments

How to Hack a WEP encrypted Wifi Access Point

In this article I would be talking about how to crack WEP encrypted wireless LAN. To start with we would require a wireless card which supports packet injection. I would suggest buy AWUS 036NH Alfa Card from ebay. It is available for less than $30. 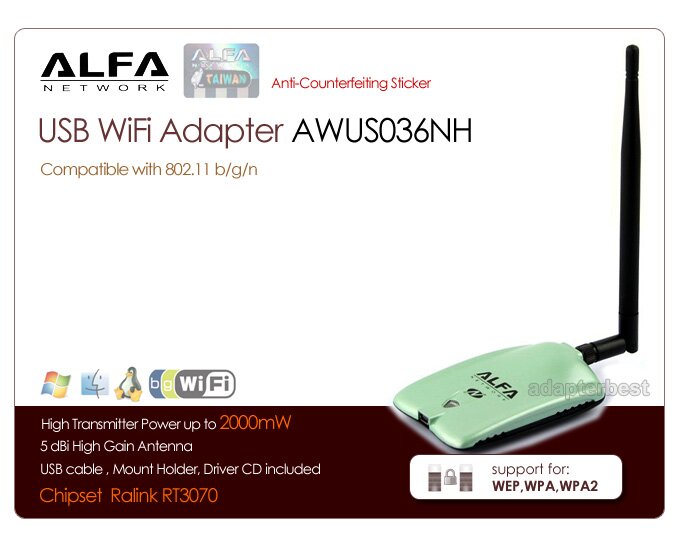 Download a image file of Kali linux from https://www.kali.org/downloads/ and install it.

Now check the various wireless network which are transmitting

Identify the particular channel of the WEP encrypted transmission . Lets say its channel 1 . Switch channel to 1 . Further identify the bssid of the AP and give the following command to collect all the packets in a file from the intended AP.

Now start another terminal and start the cracking process

The above process is passive. Incase you want to do active cracking one needs to use arp-replay

This article talks about how to create a wirless access point even when your wifi card does not support AP mode. The list of supported interface modes is obtained by giving the command $iw list. You would get a output as under

Incase your card supports the above three modes, this article is for you. Incase you are lucky and card supports AP mode also, then I would recommend use hostapd.

1.   To start with I suggest you load install Bactrack as we would require airmon-ng software , this comes preloaded in backtrack .

2. Open a terminal and give following commands to start an AP